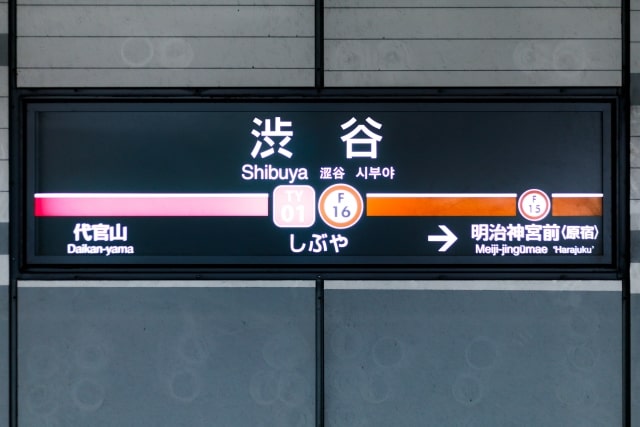 Shibuya is one of the most prominent commercial districts in Tokyo, popular with both locals and foreigners. With plenty of shopping, food, and entertainment facilities, Shibuya is almost always crowded day and night.

One of the most famous landmarks of Shibuya is the Shibuya Scramble Crossing, the world’s busiest and most photographed pedestrian crossing.

Shibuya is also a highly sought-after residential area. However, rents here are some of the most expensive in Tokyo. If you want to live near Shibuya without breaking the bank, here we list down some recommended areas that provide convenient access to Shibuya Station (located within 30 minutes by train, accessible without transfers).

From Komazawa-daigaku Station, you can reach Shibuya Station by the Tokyu Den-en-toshi Line in just around 7 minutes.

Around the station, there are several supermarkets and family restaurants. There are also 11 different convenience stores accessible within a 5-minute walk from the station.

The average monthly rent for a studio type room near Komazawa-daigaku Station is 72,000 yen. This is quite reasonable considering the convenient access to Shibuya.

The Komazawa-daigaku Station area is known for its relative safety, with very little violent crimes reported. However, bicycle thefts are not uncommon, so bicycle owners should be wary. The station can also get quite crowded with commuters during the morning rush hour.

The average monthly rent for a studio type room near Suitengumae Station is 77,000 yen.

Located within a 500-meter radius of the station are 8 supermarkets and 25 convenience stores, so shopping for necessities should not be a problem. Peacock Store, a supermarket located just 4 minutes from the station, is open 24 hours a day, great for those who come home late.

With plenty of family restaurants, fast food chains, and privately-owned cafes, dining out is also a good option.

According to crime statistics, the Suitengumae Station area is quite safe, with very little reports of robberies or violent crimes reported. However, bicycle thefts are less uncommon, so it is always a good idea to lock your bike in a designated parking area.

The average monthly rent for a studio type room near Kanamecho is 66,000 yen. This is quite inexpensive considering the convenient access to the major commercial districts of Ikebukuro, Shibuya, and Shinjuku.

Around the station, there are many convenience stores and two small groceries, but there are no large supermarkets. This may be a hassle if you like to cook your own meals, but you can do your shopping in the Ikebukuro area instead.

There are also some family restaurants, izakaya pubs, and bento shops in the area. Most of the fast food chains are located close to the station.

According to crime statistics, violent crimes are rare in the Kanamecho Station area, but there are many reports of bicycle thefts. However, it is still arguably a much safer area compared to the busy streets of Ikebukuro.

From Gakugei-daigaku Station, you can reach Shibuya Station by the Tokyu Toyoko Line in just around 8 minutes. The Tokyu Toyoko Line is the only train serving this station, but it is a through service that connects to the Fukutoshin Line, so you can also access Shinjuku and Ikebukuro in under 30 minutes.

The average monthly rent for a studio type room near Gakugei-daigaku Station is 75,000 yen. This is quite inexpensive considering the convenient access to major commercial districts in Tokyo.

Around the station, there are 5 supermarkets and 13 convenience stores. The Tokyu Store connected to the station operates until midnight, convenient for those who get home late at night.

You also have plenty of options if you like dining out, with many family restaurants, fast food chains, and privately-owned food establishments.

Reports of robberies and violent crimes are rare in the area surrounding Gakugei-daigaku Station. In particular, the Chuo-cho 2-chome and Takaban 3-chome districts have no reported crimes at all, so they are probably some of the safest places to live in this area.

In this article, we introduced some recommended residential areas that provide direct train access to Shibuya in under 30 minutes.

Shibuya is a major commercial district and a popular residential area, but living there can be quite expensive. Nevertheless, Tokyo has a well-developed train and subway network, so it is possible to live in a nearby area that offers convenient access to Shibuya.

Shibuya Station is a major terminal station that is served by many train lines, including the JR Yamanote Line, JR Saikyo Line, Hanzomon Line, Ginza Line, Fukutoshin Line, and several private railway lines. Try searching for properties near the stations along these lines to find other suitable residential areas within your preferred travel time to Shibuya.