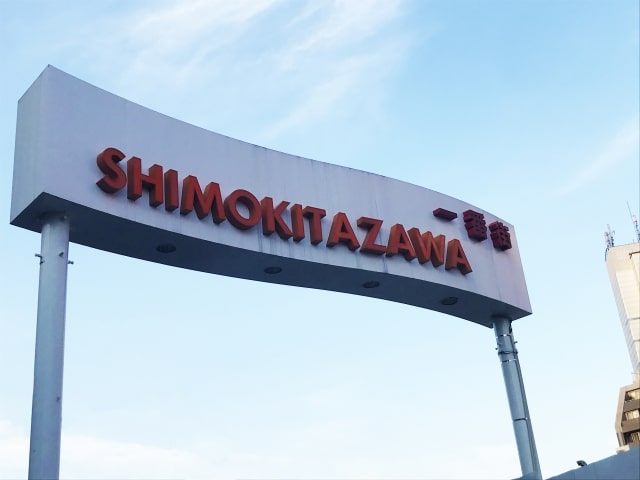 Shimokitazawa is a bohemian district that is known for its live music clubs and vintage clothing stores. It is a popular area with Japanese youth, but its retro atmosphere has also made it popular with foreign residents and tourists.

Shimokitazawa Station is served by the Odakyu Odawara Line and the Keio Inokashira Line. In this article, we list down some recommended residential areas that provide convenient access to Shimokitazawa (located within 30 minutes by train, accessible without transfers).

From Meidaimae Station, you can reach Shimokitazawa Station by the Keio Inokashira Line in just around 7 minutes. This station is also served by the Keio Line, which provides direct access to Shinjuku Station and Shibuya Station.

Meidaimae Station is located near the Meiji University Izumi Campus, so the surrounding area has many reasonably-priced but delicious food establishments aimed at college students.

The average monthly rent for a studio type room near Meidaimae Station is 68,000 yen. This is quite inexpensive considering that Shinjuku and Shibuya are directly accessible by train in under 10 minutes. While the Meidaimae Station area has no big shopping centers, this is not so inconvenient as you can just do your shopping at Shinjuku or Shibuya.

Around the station, there are some family restaurants, fast food establishments, cafes, and many izakaya pubs and ramen shops. There is also a high-end supermarket, but if you want to be more frugal, you can go to the Gyomu Super located within walking distance from the station.

According to crime statistics, the Meidaimae Station area is quite safe, with very little reports of violent crimes or even bicycle thefts. However, since there are many izakaya pubs in the area, it is probably not uncommon to see some drunken people at night.

From Eifukucho Station, you can reach Shimokitazawa Station by the Keio Inokashira Line in just around 10 minutes. Eifukucho is the adjacent station to Meidaimae, so it also offers direct and convenient access to Shibuya.

Located within the station building is a supermarket, a drugstore, and a bank, which makes shopping for daily necessities quite easy and convenient.

The average monthly rent for a studio type room near Eifukucho Station is 66,000 yen. This is quite inexpensive considering that Shibuya and Shimokitazawa are directly accessible by train in under 10 minutes.

The Eifukucho Station area is quite safe statistically, with a reported crime rate of 0.01%. There is a shopping arcade near the station that is brightly lit even at night, which probably helps in keeping crime low.

From Yoyogi-Uehara Station, you can reach Shimokitazawa Station by the Odakyu Odawara Line in around 12 minutes. This station is also served by the Chiyoda subway line, so you can easily access Shinjuku and Omote-sando without transfers.

The average monthly rent for a studio type room near Yoyogi-Uehara Station is 67,000 yen. This is quite inexpensive considering that Shimokitazawa is directly accessible is under 15 minutes while Shinjuku is just 7 minutes away.

Connected to the station building is a shopping mall called Acorde Yoyogi-Uehara. It features many food establishments, a book store, a 100-yen shop and more, making shopping and dining and quite convenient.

Around the station, there are also many privately-owned cafes that are open from the early morning, perfect for a cup of coffee or breakfast before starting your day.

From Kichijoji Station, you can reach Shimokitazawa Station by the Keio Inokashira Line in around 19 minutes.

The average monthly rent for a studio type room near Kichijoji Station is 65,000 yen, which is quite reasonable considering its ease of access to Shimokitazawa and Shibuya.

The station building and its surrounding commercial district features a large shopping mall and department store, making shopping in the area convenient. There are also many restaurant chains and small eateries that offer various kinds of food.

The area also has many supermarkets and convenience stores, but most of the supermarkets do not operate late at night, so it is a good idea to do your groceries before dark.

Another attraction of the Kichijoji Station area is Inokashira Park, a place where you can enjoy greenery in the middle of a city.

The Kichijoji Station area is relatively safe, with few reports of violent crime, though it is probably a good idea to avoid certain parts such as the Kichijoji Station North Exit area. Some of the busy areas around the station are also known hotspots for bicycle theft.

In this article, we introduced some recommended residential areas that provide direct train access to Shimokitazawa in under 30 minutes.

Though not really a big commercial district, Shimokitazawa is quite popular for its atmosphere and its music scene. This makes property rental prices in the area a bit on the high side.

Shimokitazawa is served by the Odakyu Odawara Line and the Keio Inokashira Line. If you want to live near Shimokitazawa but would rather save on rent, you can try searching for properties in nearby stations along these train lines. These lines also offer direct access to the major urban centers of Shinjuku and Shibuya.