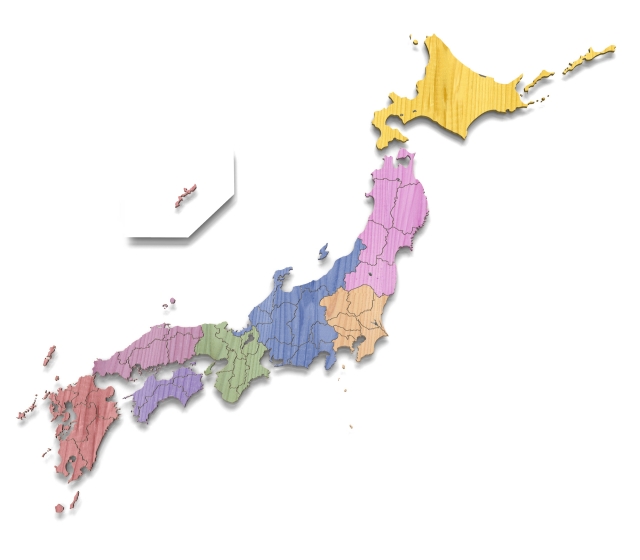 As you may know, Tokyo usually ranks inside the top 10 most expensive cities in the world to rent an apartment. But what about the other parts of Japan? Like any other country in the world, the average rent in Japan varies widely depending on the specific region or area.

Certainly, the general trend is that big cities such as Tokyo and Osaka tend to have higher rents, while more rural and remote places tend to have cheaper rates. Let’s take a closer look at the average monthly rent in the 47 prefectures of Japan.

The following table shows the average monthly rent by prefecture in the Hokkaido and Tohoku regions.

Hokkaido and Tohoku are located in northern Japan. These regions experience relatively colder temperatures compared with the rest of Japan, and Hokkaido winter temperatures commonly drop to sub-zero during the coldest months.

Rents tend to be more expensive in major cities like Sapporo and Sendai, though they are also more convenient in terms of livability. Some of the rural areas can be rich in nature, but may not have many shops or food establishments nearby. Depending on the area, rail or bus transport may not be available, so having a car might become a necessity.

The following table shows the average monthly rent by prefecture in the Kanto and the Chubu regions.

The Kanto and Chubu regions are located in the eastern and central part of Japan. Depending on the specific area, summer temperatures can be very hot, and winters can be quite snowy.

The Kanto region includes Tokyo, the place with the highest average rent in Japan, and Kanagawa, the prefecture with second most expensive average. The Kanto region, especially the Greater Tokyo Area, is quite convenient in terms of livability and transportation. However, if you choose to live in famous high-end residential areas, your rent may likely be several times higher than the average.

The Greater Tokyo Area has one of the most well-developed railway networks in the world, so living there usually means using trains for your everyday transport.

The following table shows the average monthly rent by prefecture in the Kinki and the Chugoku regions.

The Kinki and Chugoku regions are located in the western part of Japan. Similar to Kanto and Chubu, these regions can have hot summers and snowy winters depending on the specific area.

The Kinki region is home to Osaka and Kyoto, respectively the third and fourth most expensive prefectures to rent an apartment in Japan.

The metropolitan area of Osaka, Kyoto, and Kobe has a well-developed railway network, so living there is convenient in terms of rail transport. However, the farther you move away from the urban centers, the higher the chance that transport by car becomes necessary.

The following table shows the average monthly rent by prefecture in the Shikoku region.

Shikoku is an island located to the south of Hiroshima and Okayama prefectures. It has a relatively mild and warm climate thanks to the Kuroshio warm ocean current. However, it also has mountainous regions that can experience heavy snowfall in winter.

The main mode of transportation in Shikoku is car or bicycle. Though there are also trains, they do not run in many parts of the island, so havinga car or bicycle is the preferred choice for ease of movement.

Ehime Prefecture has one of the lowest average monthly rents in Japan. Its rich nature and many options for leisure activities make it good place to live in for outdoor lovers. It also offers convenient access to other prefectures in Shikoku and the main island.

The following table shows the average monthly rent by prefecture in the Kyushu and Okinawa regions.

Kyushu is an island located on the southwestern part of Japan, while Okinawa consists of a chain of islands stretching further southwest of Kyushu. These regions generally have a subtropical climate, and they experience high rainfall and many typhoons during the summer. Because of this, many properties are single storey houses or have high wall enclosures.

While rail transport is available in Kyushu and a very limited area of Okinawa, the main mode of transportation for most residents is either car or bicycle.

In this article, we listed the average monthly rent for both singles and families in each of the 47 prefectures of Japan. Note that these averages cover the whole gamut of properties, from 50-year old wooden houses with no bath and toilet, to the latest room equipped with various electrical appliances and facilities. So if you are looking for a fairly decent room with a separate bath and toilet, the rent may very likely be at least 10,000 to 20,000 yen higher than the average. In any case, we hope that this can serve as a reference if you are in a position to choose where you want to live in Japan.