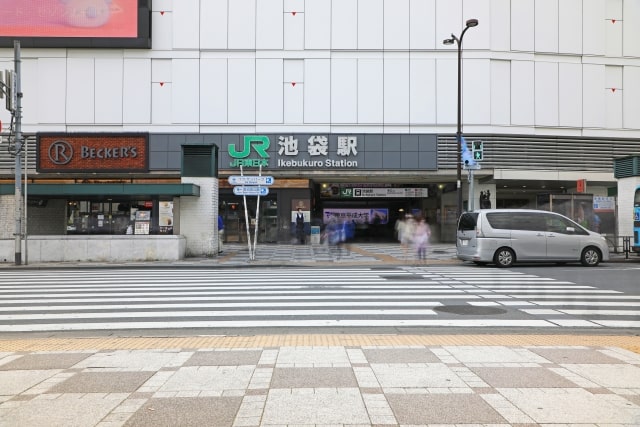 Ikebukuro is one of the most prominent business and commercial districts in Tokyo, up there with Shinjuku and Shibuya. It is home to many department stores, electronics retail stores, and other shopping centers.

Ikebukuro is also home to many foreign residents. On the north side of Ikebukuro Station, there is a small Chinatown that is not a tourist-type of Chinatown, but is frequented by many Chinese and other foreign nationals. It features many restaurants that offer authentic Chinese cuisine, as well as shops that sell Chinese food products and books.

Ikebukuro Station is one of the busiest stations in Tokyo and is served by many train lines. Since it is a popular area, rental properties near Ikebukuro Station are quite expensive. If you want to live near the area without breaking the bank, here we list down some recommended residential areas that provide convenient access to Ikebukuro (located within 30 minutes by train, accessible without transfers).

From Kanamecho Station, you can reach Ikebukuro Station by the Tokyo Metro Fukutoshin Line or Yurakucho Line in just around 2 minutes. Since it is an adjacent station, Ikebukuro is actually within walking distance from Kanamecho.

The average monthly rent for a studio type room near Kanamecho is 66,000 yen. This is quite inexpensive considering that it is within walking distance of Ikebukuro. Access to the popular commercial districts of Shinjuku and Shibuya is also quite convenient, as the Fukutoshin Line stops at these areas.

Around the station, there are some family restaurants, izakaya pubs, and bento shops. There are not many supermarkets or shopping centers nearby, so it is probably better to do your shopping in the Ikebukuro area.

Rikkyo University is also located near Kanamecho Station. Inside the university grounds, there is the old residence of Edogawa Ranpo, a famous mystery fiction writer. The residence/memorial center features his works and other related artifacts, and is a must-visit for mystery book lovers.

According to crime statistics, there are many bicycle thefts around Kanamecho Station, so caution is advised. Violent crimes are rare, and it is arguably a much safer area compared to the busy streets of Ikebukuro.

From Shakujii-koen Station, you can reach Ikebukuro Station by the Seibu Ikebukuro Line in around 19 minutes.

The average monthly rent for a studio type room near Shakujii-koen Station is 57,000 yen, which is quite cheap considering its ease of access to Ikebukuro.

The station building and its surrounding area has many places for shopping. There are also quite a few small, privately-owned restaurants and cafes, so dining out is convenient. The nearby Shakujii Park also offers rich greenery within an urban environment.

The area around the station 11 convenience stores within a 500-meter radius. There are also 8 supermarkets, including a high-end Queen’s Isetan and a small but friendly Manamart.

The area is quite safe, with very little reported violent crimes, so it is suitable even for those living alone.

From Musashi-Urawa Station, you can reach Ikebukuro Station by the JR Saikyo Line in around 22 minutes.

The average monthly rent for a studio type room near Musashi-Urawa Station is 50,000 yen. This is quite affordable considering that you can easily take the Saikyo Line to access the major stations of Ikebukuro, Shinjuku, and Shibuya without any transfers.

The station building is connected to two major shopping centers: Beans and Mare. The surrounding area is a commercial district with several supermarkets, drug stores, and convenience stores, as well as plenty of restaurants that make dining out a convenience.

Despite being a busy area, Musashi-Urawa is quite safe, with very little reported violent crimes, so it is a suitable residential area even for those living alone.

To the south of the station in Numakage 3-chome, you will find the Urawa factory of Lotte, a famous manufacturer of sweets and chocolate. If you take a walk nearby, you might get a whiff of the sweet smell of their products being made.

Wakoshi Station is located in Wako City, Saitama Prefecture, but access to central Tokyo is quite convenient. The average monthly rent for a studio type room in this area is 55,000 yen, which is relatively cheap considering its convenience of access.

There are very little reports of violent crimes in the Wakoshi Station area, so it is a suitable residential area even for families or those living alone.

The station’s surrounding area has 5 supermarkets and 5 convenience stores, which may seem few, but there is also the Equia Premie Wako, a commercial center inside the station building. Here you will find over 25 shops and restaurants, so dining or shopping for necessities won’t be a problem. However, only a few supermarkets operate past 11:00 PM, so shopping options may be less for those who come home late at night.

Since most of the supermarkets and restaurants are near the south exit of Wakoshi Station, it is probably a good idea to search for a rental property located to the south of the station.

In this article, we introduced four recommended residential areas that provide direct train access to Ikebukuro within 30 minutes.

The Ikebukuro Station area is major commercial district and a popular residential area, but living there can be quite expensive. Nevertheless, Tokyo has a well-developed train and subway network, so it is possible to live in an area that offers convenient access to Ikebukuro.

The stations on the Tokyo Metro Fukutoshin Line are good candidates for such residential areas. Not only are they relatively safe, living near a station along the Fukutoshin Line offers you easy access to major terminal stations like Shinjuku and Shibuya.

Since Ikebukuro is also a major terminal station, you can try searching for properties near stations along the railway lines that serve Ikebukuro to find other suitable areas within your preferred travel time.