What is the average salary in 【Osaka】? We have put together a complete national comparison by age and by occupation.

What is the average salary in 【Osaka】? We have put together a complete national comparison by age and by occupation. 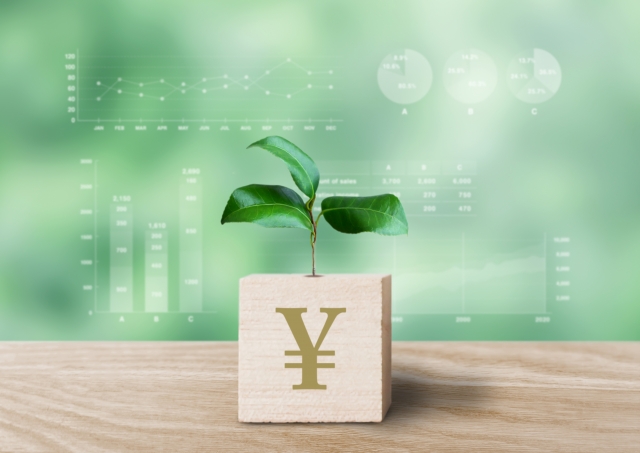 Osaka is one of the most important prefectures in Japan, with a population of 8.8113 million and a nominal GDP of 40.2 trillion yen in 2018. Since old times, Osaka has been called the “Kitchen of Japan”, and it flourished as a merchant city where goods from all over the country were gathered. The region that includes Osaka and Kyoto was often called “Kamigata,” and was the center of Japanese culture and economy in the middle ages. Even up to the early 20th century, Osaka City was actually the most populous city in Japan. It remains a major industrial center to this day, with many major corporations including Panasonic, Takeda Pharmaceuticals, and Asahi Kasei having headquarters in the prefecture. Osaka used to be the second most populous prefecture in Japan after Tokyo, but it was overtaken by Kanagawa in 2018, with Osaka falling to third.

In this article, we will examine the average salary in Osaka Prefecture.

For comparison, the table below shows the average salary for all of Japan. The national average annual salary is just over 5 million yen, making the Osaka average more than 400,000 yen higher than the Japan average. However, Osaka is actually in 4th place by prefecture, behind Tokyo, Kanagawa, and Aichi.

The following graph shows the average annual salary in Osaka Prefecture by gender for the 15-year period from 2005 to 2019. The 2008 Global Financial Crisis caused wages to fall all over Japan in 2009, but it mostly recovered from the following year. In Osaka however, the drop continued up to 2010. Although wages gradually recovered from the following year onwards, if we compare the overall average in 2005 and the average in 2019, only a slight increase can be seen. The effect of the financial crisis seems to be smaller in women’s wages, with the average salary going from 3.675 million yen in 2005 to 4.195 million yen in 2019. 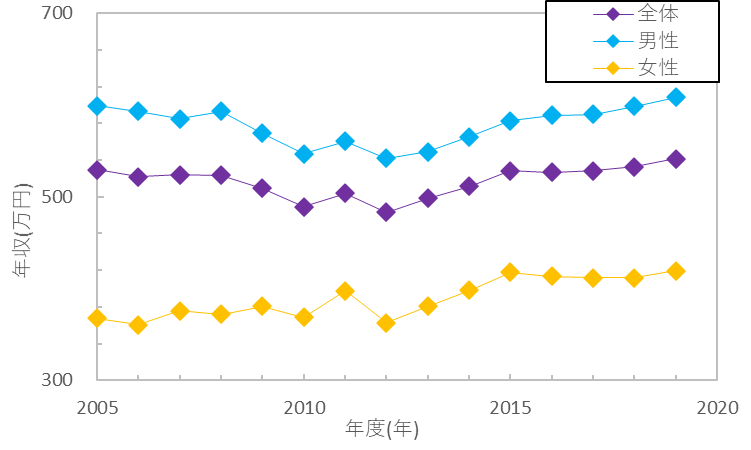 The following graph shows the average annual salary in Osaka Prefecture by age group. We also give an analysis for each age group below. 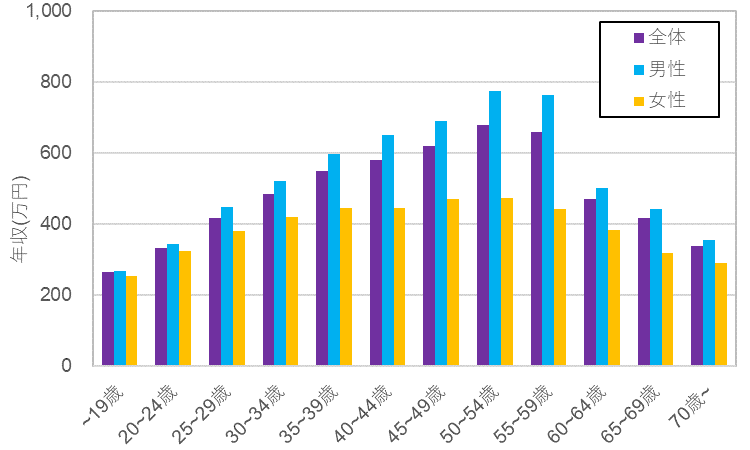 Although the average annual salary is nearly equivalent for Osaka men and women in their early 20s, the rate of increase in men’s wages is virtually linear up to the 50s, while women’s wages become somewhat stagnant from the late 30s. The gender wage gap is around 200,000 yen in the early 20s, but this increases significantly to around 680,000 yen by the late 20s.

Men’s annual wages continue to increase in a linear fashion in this age group, reaching 5.992 million by the late 30s. On the other hand, women’s wages start to stagnate from the late 30s, becoming virtually flat even as age goes up.

The annual salary for both men and women peaks in the early 50s, with an average of 7.755 million yen for men and 4.741 million yen for women. From here on, wages decrease as the age goes up, with men experiencing a significant drop in the 60s, while women’s wages show a more gradual decline. 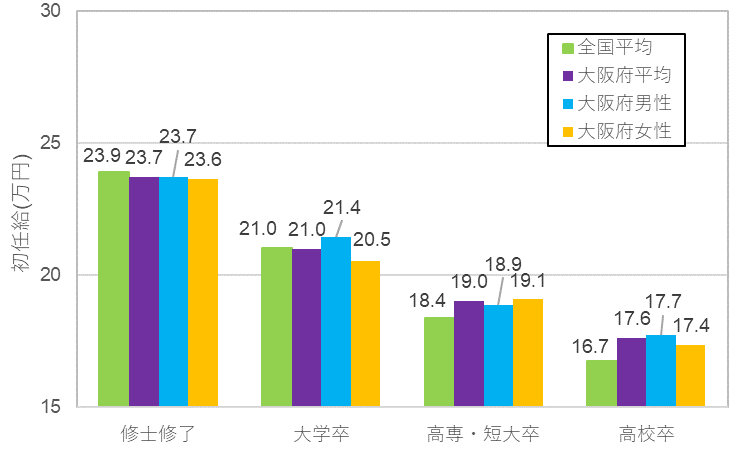 The table below shows the average annual salary in Osaka Prefecture by industry for the year 2019. Looking at the rank column, Osaka ranks near the top among all 47 prefectures for nearly every industry. Industries in Osaka with average annual salaries over 6 million yen include Electricity/Gas/Heat Supply/Water, Scientific Research/Professional/Technical Services, and Education/Learning Support. Industries where Osaka ranks second in terms of salary (behind Tokyo) among all prefectures include Construction, Transport/Postal Activities, Wholesale/Retail Trade, Finance/Insurance, Real Estate/Goods Rental, and Compound Services. These all serve to highlight Osaka’s role as the major economic center of the Kansai region.

On the other hand, industries that pay relatively lower in Osaka include Mining/Quarrying of Stone and Gravel, Accommodations/Food and Beverage, Living-related/Amusement Services, and Services, with average annual salaries in the 3 million yen range. For Mining/Quarrying of Stone and Gravel, Osaka ranks 32nd among all prefectures, which indicates that it is not a particularly lucrative industry in Osaka.

Osaka Prefecture boasts the largest economy in western Japan, and is the economic and political center of the Kansai region. This fact is reflected in its relatively high average annual salaries. However, Osaka’s population and economic prowess seems to be gradually declining in recent years, especially when compared to the advancement of other major prefectures.